Our patient was sitting on his couch and suddenly he noticed his vision starting to go dark within his right eye. He woke up the next morning to not being able to see out of his right eye at all.

He immediately went to his doctor’s office and they ran tests which confirmed he had suffered an eye stroke or Central Retinal Artery Occlusion (CRAO).

CRAO is described as a sudden, painless, loss of vision in one of your eyes. CRAO is one of the newer accepted insurance conditions. Prior to confirming that HBOT is a successful treatment, patients were only able to fight the condition by controlling their blood pressure.

Lucky our patient’s ophthalmologist had seen this before when treating Veterans in the VA and he knew that timing was of the essence. He then referred his patient to the closest wound care and hyperbaric center in their area.

The patient and his wife contacted the center and come to find out his insurance, Medicare was the only insurance that did not cover treatment for his condition. His wife insisted on paying cash for her husband’s treatment but was turned away for not fitting into their narrow guidelines.

The wife contacted our office by 12 p.m. that day and he was in our chamber treated being aggressively by 1400 in a last attempt to restore his eyesight.

Over the two days the patient had 3 treatments and we successfully restored his vision back to 27%.

Our patient is happy he can continue to see his grandson & we are excited we could be there for him when he needed us! 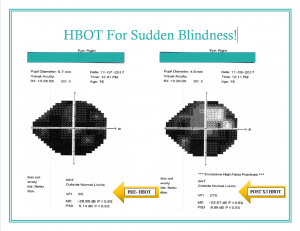 Back to all blogs
Previous Next

Book your 30 minute tour and consultation