Patient was referred to our office for a Hyperbaric Oxygen Therapy consult for post radiation wound breakdown with infection. Patient has a history of left breast cancer stage 2, with acute post radiation wound breakdown due to the intraoperative radiation. Patient underwent seed localization as well as radionucleotide injection preoperatively. The patient developed a wound from radiation and was not showing any signs of healing in over 2 months. The symptoms associated with the patient’s condition are a non-healing tunneling wound, pain, difficulty sleeping, swelling. Upon initial examination there was hardening of the skin around the wound, drainage, apparent infection, redness, and swelling around wound. The patient also presented with about 4 feet of gauze packing into her wound. HBOT was initiated in adjunction with weekly wound care from her referring physician. Within the first 20 treatments, the patient’s wound decreased in half its size. The amount of packing also decreased to half. By 40 treatments, the patient was 100% healed; no swelling, redness, infection, and the hardening of the skin had decreased dramatically. Now it has been a few months post HBOT and the patient’s wound remains closed with no signs of concern. 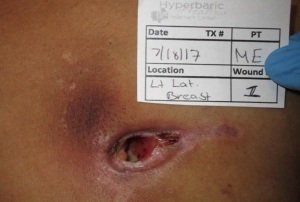 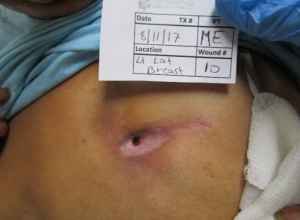 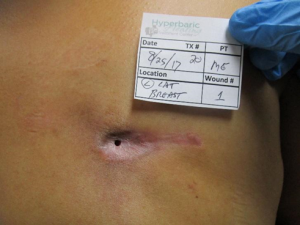 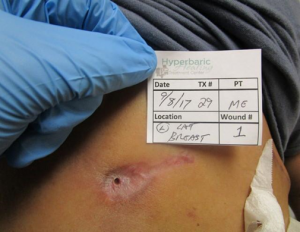 PT Comments:
“My wife just completed 40 sessions of treatment due to complications from a lumpectomy with intraoperative radiation. We can’t say enough about how great Erika, Gary and Jenifer are. We would highly recommend this facility to anyone needing Hyperbaric Treatment. They made my wife feel so at home. It was bitter sweet saying goodbye today.”

Once the biopsy confirmed her breast cancer she underwent chemotherapy & a mastectomy. The incision site of her mastectomy was showing very slow signs of healing and started to fail. The patient underwent a Operating room surgical debridement procedure in hopes to initiate the healing again. Unfortunately, the flap site was showing signs of failing again by way of blue colored nipple, bloody discharge, & swelling. At this point her doctor knew that HBOT was what she needed in a chance to save her leftover breast tissue & nipple post mastectomy. If HBOT did not work the pt was going to be forced to undergo another surgery. The Patient was also unable to start her much needed radiation treatments until her wound was completely healed. Once she started treatment with us she continued to have her weekly wound care with her referring physician.

With in her first few treatments the discharge stopped, and the blue colored tissue started to normalize. By her 20th treatment the patient was completely healed and given the ok from her doctor for her to start her radiation treatments. Now the patient is about to finish her 6 weeks of radiation; her wound has not reopened and continues to have no signs of concerns. 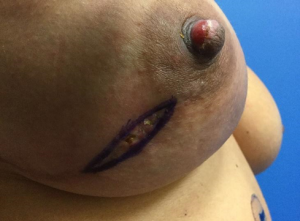 PT Comments:
“Simply an amazing team! I am healed and I call them my Angels on earth!
Thank you to the owner Erika, for not letting me go despite my medical insurance denying coverage. I am a cancer thriver, survivor and this has been a blessing which literally saved my breast. After going thru major surgery because of breast cancer, my incision wasn’t getting better. Surgeon stitched it up 2 more times and it kept on opening. Finally, I was contacted by Erika and thankfully was able to start something new, and my last attempt to save my reconstruction after mastectomy. I have never had a problem healing but I suppose chemotherapy is ugly and really messes up things. This place feels like a beautiful spa, cozy, inviting, clean & I can go on and on about it, but at the end of it all is, that my story is an affirmation, Hyperbaric Treatments work and I will forever be thankful. It saved me from a lot more other surgeries, complications, and possibly my life. They are now family. Love them.”

Patient received radiation to her left breast. The symptoms associated with the patient’s condition are pain, swelling, difficulty sleeping. Patient developed a non-healing abscess as a result from the radiation exposed to her left breast. The patient had her wound for over 6 months prior to initiating treatment with us. Once HBOT started the patient continued to receive weekly wound care from her referring physician. Chronic pigmentation on skin in area of radiation & thickening of skin around wound was also seen. Patient received a total of 10 treatments. Once a day for 2 weeks. The patient was very happy with her expedited healing from having treatment with us. Patient continues to be completely healed and is having no concerns/signs with reopening of her previous wound. 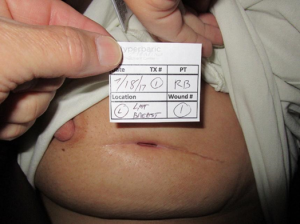 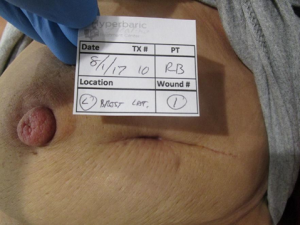 Back to all blogs
Next